The wonderful Seán Rocks interviewed me about darling Belle on Arena. Link here. 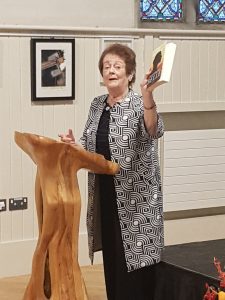 Fantastic night in the Church Gallery at Ballinasloe Library for the launch of Becoming Belle and the opening of my artist collective’s exhibition, MAPS. Mary O’Rourke did the launching honours. A warm atmosphere and many, many people showed up to support us all.

Fittingly, 11th September was Belle Bilton’s birthday.So I bought her a cake. 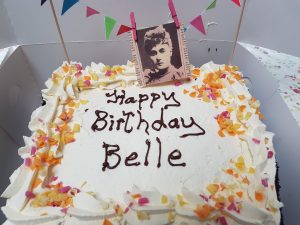 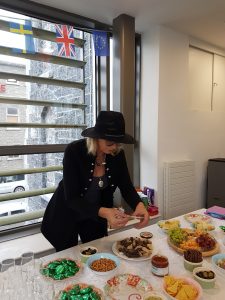 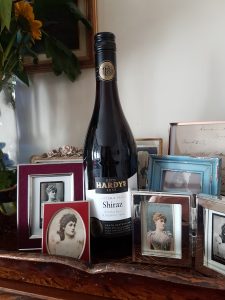 Excellent review by Helen Cullen of Becoming Belle in the Irish Times:

Hilary Mantel suggested that in death “we enter into fiction”, whereby the lives of the deceased become stories told by their survivors, open to interpretation, creative embellishment, reappraisal, judgment. If Isabel Bilton, the heroine of O’Connor’s absorbing work of historical fiction were to read Becoming Belle today, it is interesting to consider how recognisable she would find the portrait painted of her. No doubt she would be gratified for it is all but impossible to read of her coming-of-age in Victorian London without being utterly charmed by this woman who forged a feminist path ahead of her time.

The novel begins in earnest in London in the summer of 1887; Isabel Bilton at 19 has fled her small-town world and military family life to carve out a razzle-dazzle career on the stage. Before this, a somewhat superfluous prologue introduces us to her provincial upbringing, establishes her familial infrastructure and lays the foundations for her need to escape. If the novel instead had begun at the point of her first audition, our understanding would not have suffered, for it as it is from that moment onwards that the story truly starts to sizzle.

O’Connor focuses on the four years of Isabel’s life where she evolves from country mouse into the infamous “Belle” and darling of theatrical society. As one half of a double act with her sister, Flo, the Bilton Sisters are a triumph and Belle becomes a devastatingly beautiful fixture of the 19th-century bohemian clubs she frequents. During this relatively short period of time, we witness her suffering the consequences of some ill-guided decisions and questionable behaviour that society considered scandalous. It’s a compelling account of her ascent and ultimate battle to become “the peasant countess” and accepted member of the Irish aristocracy. Through her turbulent marriage to her beloved but immature Viscount Dunlo of Ballinasloe, Ireland becomes her destiny.

The novel is rich with authentic, nuanced depictions of Victorian London and it is clear that O’Connor has undertaken meticulous research; the results are woven into the fabric of the novel with a deft, light touch. Carefully considered historical details support the narrative beautifully without overwhelming it; a testimony to the author’s comfort with her subject and her craft. This is particularly evident in the vivid images conjured of the salacious after-hours salons where the society set mingled, the shimmering accounts of Belle’s performances on stage, and the sensual evocations of the London streetscapes. It is within these descriptive passages that the reader can become fully immersed in the era and dissolve into the world that the story inhabits. To have had even more insight into the world of the theatre itself, presented in such glorious detail, would have been a joy.

The novel works best when we bear witness to the physical action of the characters through their sparkling dialogue, interactions and behaviours. At times, the extended forays into their interior world feels more laboured than necessary, somewhat repetitious, and heavier-handed than was required. O’Connor is an accomplished writer and should be confident that her story-telling prowess negates the need to explain too much; the reader is inhabiting the story and understands already from her excellent account what meaning should be derived without it being spelled out to us. One of her beautifully crafted sentences such as, “Isabel only needed to be 40 miles from Aldershot in order to unlock liberty”, already tells us so much. Nonetheless, this small tendency does not detract from the overall satisfaction of living in Belle’s world and experiencing the city with her.

A pivotal court case at the centre of the narrative is expertly written with tension, compassion, and finely tuned observations of human behaviour. During these scenes, O’Connor is masterful in her control of the plot and they are without a doubt the finest passages of the novel. An economy of language, purposeful prose and unfaltering rhythm carries procedures along with a pace and execution that is pitched perfectly and completely arresting.

When we leave Belle, the recently retired starlet is embarking upon a new life in rural Ireland. How will she adjust to the role as a countess in lieu of her former position as cultural phenomenon and infamous pin-up? O’Connor allows us to feel optimistic for her, the heroine we have rooted for, despaired over, and ultimately fallen for. Perhaps the author will consider granting us a sequel where the story continues. For now, though we must be content to have been awarded this opportunity to be transported into a living, breathing Victorian London and to become acquainted with the seductive and sensational Isabel Bilton. O’Connor’s fictionalised account of this remarkable true story is an accomplished work of historical fiction that fans of the genre will no doubt enjoy.

A piece I wrote on biofictioning Belle Bilton at writing.ie.

Two stellar reviews in the Sunday Independent and the Sunday Business Post. 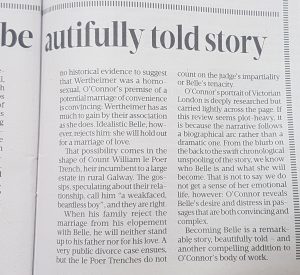 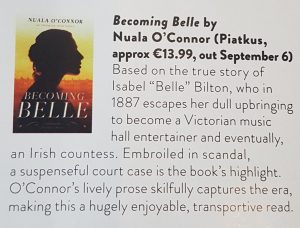 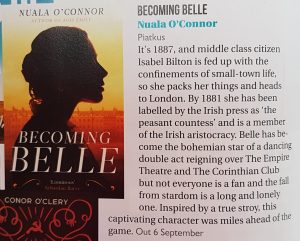 Sweet review of Becoming Belle in the September 2018 issue of Irish Country Magazine.