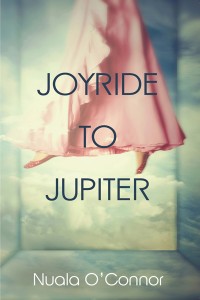 A heartbroken man deals with his wife’s Alzheimer’s as best he can. The Jesus of O’Connell Street reflects on his situation, which isn’t half bad. A too-young girl witnesses her father’s shocking infidelity. A quiet murder on a riverbank.

Imperfect lovers and unlikely friends thwart and bolster each other as they act out their dramas on the beaches of Brazil, in the bedrooms of Dublin, and in the wilds of North America. With prose both lyrical and profound, the award-winning Nuala O’Connor writes of maternal love and cross-generational friendship but here, also, are stories of ageing, suicide, and the buoyancy of new love.

Praise for Joyride to Jupiter

“O’Connor’s language is clean and conscientious as well as poetic and lyrical, evident in the abstraction of “Yellow”. The collection exudes a quiet confidence and exercises the exemplary restraint of a seasoned writer who knows when to pull rather than push.”

“This blending of wry, caustic irreverence and meditative poignancy is central to the success of O’Connor’s storytelling. The mix is just right…”

“Like a volume of rich poetry, this collection begs to be returned to again and again.”

“O’Connor has a sublime form as a poet, and even in an entirely different medium, her effortless economy of language and subtlety is writ large.”

“Some of the characters in the 154-page collection are flawed, disillusioned, marginalised, the sexual nun, the mistress, the childless woman, even ‘Jesus of Dublin’ is given a voice. But above all there’s hope. You’ll come away from this collection re-adjusting your perspective, refreshed and charmed.
Joyride to Jupiter is a tonic for the soul.”