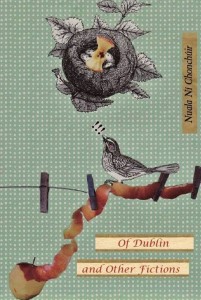 Nuala’s flash fiction has won the Dublin Review of Books Flash Fiction Prize, the Take a Leap Flash Award in 2012 and, most recently, the 2013 Gladstone’s Library Prize (UK). Now she has published her first chapbook of short-short stories, Of Dublin and Other Fictions, with Idaho-based Tower Press.

British author Tania Hershman, author of My Mother Was An Upright Piano: Fictions (Tangent, 2012), says of the book:

‘Nuala Ní Chonchúir does sacred and profane, male and female, love, sex and war, body and mind, the Irish, the human and the non-human, better than almost any other writer I know. Her language is part poetry, part bawdyhouse; her short short stories will leave you gasping and reeling. She surely is an adjective by now: NíChonchúiresque, an original, unique.’

Of Dublin and Other Fictions Virtual Tour

Nuala has visited blogs on a virtual tour for interviews about her chapbook and her writing.

Trailer for Of Dublin and Other Fictions

Nuala reads an extract from the story ‘Fish’.